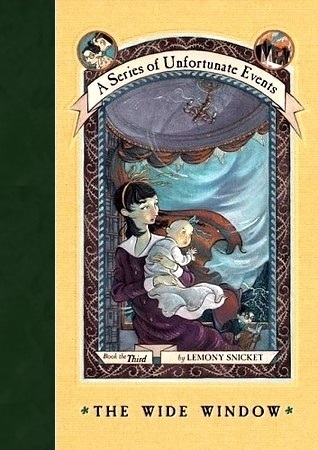 I might be in the minority here, but I actually thought The Wide Window was a better story than The Reptile Room. I can’t really explain it other than I thought Aunt Josephine was a more interesting character than Uncle Monty and here we really get to see how evil Count Olaf is whereas in the other two stories his evil doings were shown more off page.

Another adventure where the incredibly misfortunate Baudelaire children are shipped off to another random relative to hopefully find a permanent home after the untimely death of their parents in their house fire. Aunt Josephine lives at the very top of a hill overlooking Lake Lachrymose, which is filled with deadly leeches and is so large it evokes hurricanes (I’m picturing this lake to be as large as the Great Lakes since those have actually had reports of Hurricanes! And because I’m from Michigan and it’s fun to imagine this story taking place in my home state). Aunt Josephine is deathly afraid of many things in life, including but not limited to: the stove, the telephone, welcome mats, door knobs, and real estate agents. Which is why I find it troublesome that one day while shopping Aunt Josephine meets Captain Sham (who is literally a sham) and finds him irresistibly charming as all the adults in this story do. Later that night there is a loud crash in Aunt Josephine’s house and the Baudelaire children are led to believe that Aunt Josephine has jumped out the window and fallen to her death in Lake Lachrymose.

Before her untimely ‘supposed’ death, Aunt Josephine left a mysterious letter behind and left the children in the care of Captain Sham, which is beyond a terrible idea because she’d known him for all of 12 hours. But, I digress. The children figure out that the letter Aunt Josephine left behind was full of grammatical errors, one thing Aunt Josephine would never do, and this leads them to believe this letter is actually a clue as to what happened to her. After decoding the message, the children steal one of Captain Sham’s boats and sail across Lake Lachrymose during a hurricane to try and find Aunt Josephine and bring her back. On their return trip they are being over taken by leeches because Aunt Josephine ate a banana before leaving and the leeches can smell the food on her! Violet comes up with an invention to make a signal and hopefully attract help. Naturally the person that comes to help is Captain Sham, who saves them but also murders Aunt Josephine by pushing her into the lake and allowing her to be eaten by the leeches (this story got dark ya’ll) so that she can’t take the children from him. In the end Sunny finds a way to reveal to the adults that Captain Sham is actually Count Olaf before he makes another dastardly escape.

I thought this storyline was incredibly intriguing and kept my interest the entire time. I will say though, this was the first audiobook narrated by Lemon Snicket himself. And while he did an excellent job narrating his own story, I do think something is either wrong with the audio itself or he just has a wide range of vocals because when he does certain voices or starts yelling when a character would be yelling it was almost ear splitting. While driving and listening to it I almost had a heart attack the first time it happened and may or may not have screamed because it scared me so much. It got tiresome after a while because I was constantly having to turn the volume down during the yelling parts but then during normal narrating or conversations I couldn’t hear the audio at all. Other than that though the experience was very pleasant. I did think it was amazing that the actual author narrated his own audiobook.

I also very much enjoyed Aunt Josephine, even though she was a little crazy. For example, she made the children eat cold cucumber soup which sounds absolutely terrible and it was only because she was afraid to turn on the stove, so of course no warm food was eaten in her house. But I thought Aunt Josephine was very well described because it showed how human she was, she was so afraid of everything but to me it made her less 2D of a character. With a story like this character development is so important since the characters are always changing as the Baudelaire children are moved around. I appreciate Snicket’s ability to show off new character’s and still make you feel for them even when you know they will either die or won’t be in the next story!

I am 3 books ahead of this story as I write this review, so I know a lot more about the children and their terrible misfortune now so looking back at this story at the time it seemed absolutely horrendous but honestly it only gets worse from here. I hope to have those reviews up soon, so I don’t fall too far behind!

View all posts by Bookishly Brittknee